Posted by JWL On 2013/9/13 16:48:19
I just completed an unnecessary improvement to the 37 Six Convertible. I got tired of having to move the seat cushion out of the way and remove the cover to check and service the battery I relocated the battery from under the seat to the engine compartment. I got the idea from one of the craigslisting showing a '38 Eight with a 12-volt battery mounted on the cowl wall.

Before drilling any holes, I made up some cardboard mock ups of the battery and box bottom to be sure the box and battery would clear the hood panel .

I also relocated the voltage regulator from the cowl wall to the fender splash panel with the same wiring - no cutting or splicing was done.

There was just enough width to mount the battery box on the cowl wall. I obtained the battery box from Speedway Motors. Cost was reasonable, about $35. It is exceptionally well built. I fastened the box to the cowl with 3/8" bolts and nuts with large fender washers on the inside of the cowl. I had to fabricate some spacers for the top bolts because the cowl slants away from vertical.

I had new 00 battery cables made at a local alternator and starter shop with proper positive and negative battery terminals. The starter really turns over with the new cables - almost sounds like it is on 12-volts. Cost was most affordable, about $38 for the pair.

The horns on the cowl wall was an earlier mod. I did this change for looks. I think they look better on the wall than on the cylinder head, and I think the engine looks better with out them mounted. Again, I used the original wiring without any cutting or permanent splicing.

I have saved all the original parts and the car can be restored back to its original configuration with little work. There will be some holes in the cowl wall that will need to be plugged, but that is the extent of anything permanent being changed. Modifications I do to my Packards are done so there is no permanent alterations. Any parts I remove are saved and they can all be easily reinstalled to original.

I fully understand and appreciate those who are strict in keeping their Packards absolutely original/authentic. I admire their efforts and ask them to keep up the work. Sometimes I just like to put my own imprint on things. 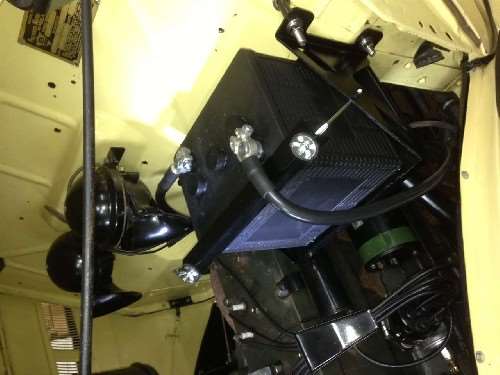