Posted by HH56 on 2017/7/16 21:29:03
Here is the procedure as given in the 51-4 manual. The 38-9 manual doesn't go into the description of turning between end stops and then going back to exactly 1/2 the amount of turns it took to go full but you were on the right track. I would think it should work the same way for 39 even though the steering boxes are different. The amount of measured force needed to pull the 39 wheel thru the high spot is much higher than the amount given for the later models so you would need to use those earlier numbers if you want to go exactly by the book.

If you don't have a scale, Amazon has spring scales or balances as they are sometimes called. You could also use an electronic hanging or hand held fish scale in place of the spring scale mentioned in the procedure. A local store should carry those as again does Amazon. They can be bought for around $10-15 in the range needed with an accuracy of grams or ounces which is probably better than the scales Packard used. 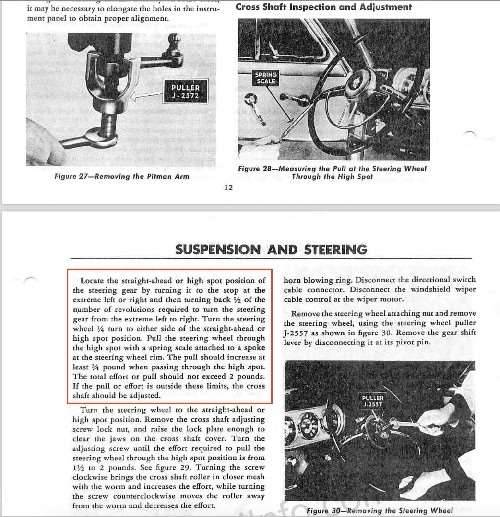