Posted by blue40devil on 2019/10/26 7:13:39
Well, I have decided, after some encouragement to start a blog on getting my 1608 7 passenger touring on the road again. I bought it over a year ago, and thru the help of the club have been able to contact a previous owner from the 70's and determined the owner before him had moved and passed on. Big blanks prior to '70 and after say '78. Based on the CA inspection sticker it was last on the road in 72.

I wanted a BIG car to fit the kids and grand kids in, wanted a V12, sidemounts, luggage rack, Trippe lights etc. and didn't have open Twelve money, so this is what I have. Plan is to make it a wedding event car for when I retire. The car had a weigh scale ticket that read 6,110#'s

Car was very complete and had original interior and paint, but unfortunately, I don't think either is salvageable. The roof was out of it, probably due to an electrical short in the dome light. Only has surface rust and the bolts are amazingly unseized. Love California cars. Seller listed it as Green and when I got it, it turned out to be faded Centennial Blue.

I was at Hershey and found one of the last missing things, and there were not many, the Senior Grooved hood handle. A club vendor was able to supply the other one, so that is behind me. 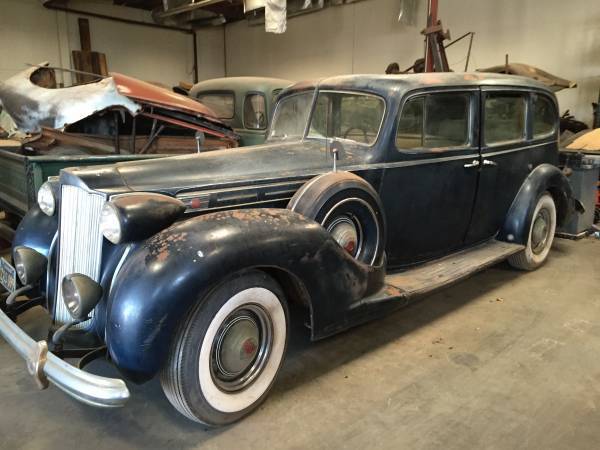