Posted by HH56 on 2021/7/27 10:53:59
For what it is worth, some years ago another poster made a chart that gives some temperature to gauge correlation. He did it on a 52 model using the resistance at the sender to correspond to the gauge temp reading.

51 to 54 models have essentially the same setup with exception that some 53s had a sender issue and the mod to correct the reading might never have been done to some cars already in the field. Even with a bit of error factored in you should still be able to get some rough idea of the actual temp in your car.

As an example, if 35 ohms makes the needle rest at "T" then looking at the other chart it would indicate 35 ohms would be slightly over 150 degrees so you could probably be safe in saying the temp on your car would be in the 150-160 range when the needle is at "T".

I don't know if Packard ever gave a spec for what is an acceptable range. That would depend a lot on the climate and whether one of the optional temp thermostats was installed. Packard offered thermostats in a range of 151 to 180 degrees for the 51-4 models with 160 being the standard. I believe most would agree that the thermostat opening temp plus 10-15 degrees would be an acceptable running temp and that range would fall in line with a standard thermostat and the resistance reading for the needle being between E and M or midpoint on the gauge. Packard does mention an occasional higher reading being normal after a long slow period in traffic or after pulling a heavy load as long as that higher reading goes back down to the previous driving range within a few minutes of resumed normal driving. 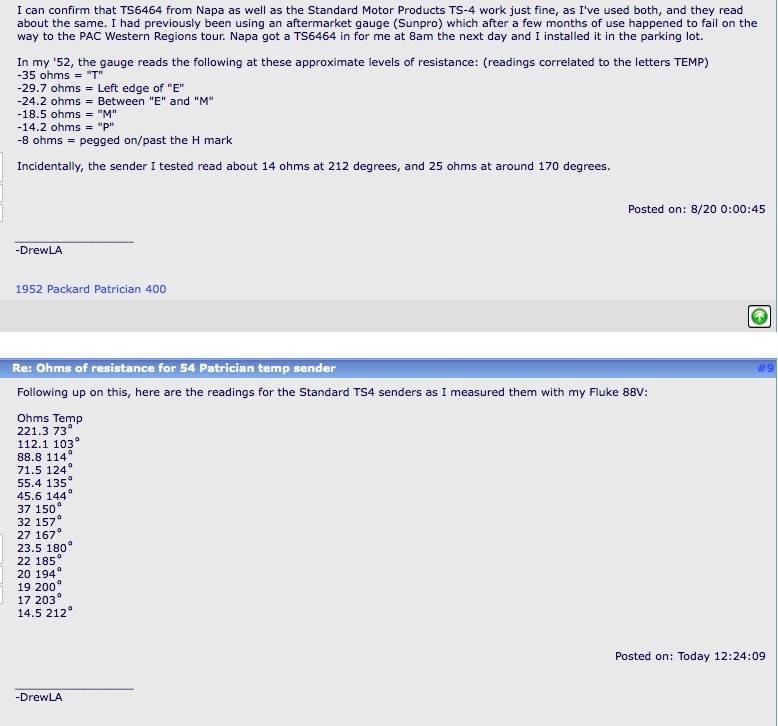