I want to make it clear this post is about keeping the original engine but doing modifications to modernize it.

From the factory my '53 came out with the rare 327 nine main Flathead straight eight. It has the Ultramatic 2-speed transmission, and what i believe to be a 3.54 geared rear end. The engine needs significant machining work due to the head being left off for years, and missing all of the valve train and lifters but it is very savable, just very expensive......

What i would like to do will be one of two things:

Either swap in place of the old engine a 3.7 liter v6 engine and 6 speed auto out of a 2011 mustang I have for parts for another car.

Or Rebuild the original engine and trans and probably spend thousands.

Now, I understand many will hearken me to swap engines or not; but hear me out. As rare and unique as Packards are, as well as the high quality of craftsmanship put into them, especially a Flathead straight 8 with 9 main bearings, it almost seems wrong to swap the engine out. Plus there is the added headache of doing the engine swap due to mounting the engine in the engine bay(Packard mounted the 327 at the very front and the engine is 4 feet long), and the wiring mess the car may become especially since very few people do 3.7 swaps as of yet.

And before someone says it. YES, i could do an LS swap, but... I got the 3.7 for free, I bought the car it is in for 900 dollars and got 1500 dollars in parts from it to fix my 2010 mustang so the motor is basically free and has 90k miles or less. Plus there has been an LS swap done already on a 53 clipper sedan. It looked great, but I'm in the mood to do something different.

(Keep in mind the factory engine and trans weigh 1100 pounds on their own so swapping would make the car weigh around 3500lbs vs 4200lbs and really scoot down the road.)

Alright enough with the preliminaries, lets get onto the point of my post here.

If I do decide to keep the ORIGINAL ENGINE and rebuild it there are various things I would like to do to modernize it and I am open to suggestions or any useful information about these engines. Especially anything from the old guys who use to race these engines back in the day. What were the tricks?

Firstly I would like to put a modern automatic transmission up against the engine. Maybe a th400 with a gear vendors overdrive to make it a 6 speed? Or maybe the 700R4 or a Ford AOD. I would rebuild the 2 speed but its incredibly expensive, meticulous, and I want more than the factory estimated 15 mpg highway. I plan to drive my car everywhere and take it over 100k miles at least.

Second, I figure part of the issue with the car only getting 15 mpg factory is the 3.54 rear end. They did this because of the 2 speed trans I assume. The motor factory makes 180 hp, 300 lbs of torque and the car only weighs 4200 lbs, it doesn't struggle to move like other cars of its time.

I have a ford 9-inch laying around but if anyone knows anything about these old Packard rear ends and where I might come across a lower gears set for one such as a 3.23 i would really appreciate it. If not i appreciate any recommendations on what to do with the 9-inch instead.

I really only want to hit the 20 mpg mark. But if it gets better then HECK YEA!

Third and MOST IMPORTANT. If i am not able to change the above two that will be fine in the end, but i would like to change this one.

I would like to do multiple things to the engine itself. I would like to hire a shop to polish and potentially port the engine to really free up some mileage and power, and I would like to commission a custom intake and exhaust manifold for it as well. Does anyone have any suggestions on who to call? I do not care for price, I don't have much money but I will save and spend it if I choose this route. Money is no object, only a means to an end.

On the topic of the intake and exhaust, I would like to either do a dual 2 barrel or another single 4 barrel setup like factory. But I will be using an EFI system like Sniper from Holley or Fast.

I want to use EFI because I would like to turbo charge the engine. Nothing major, i just want to hit either the 300 hp. mark or make 400 lbs of torque.I'm sure it can make that power!!! The engine has a light compression ratio of 8.7:1 and I feel like even the factory rods and pistons should be able to handle 5-8 lbs of boost. I'll probably only try to run about 6 at most. I've seen many supercharged but I'm just a bit different in my methods.

But on that subject, does anyone have any recommendations? How to go about it? Any good fabricators who like the challenge of an older engine with modern parts?

If possible i would also want to do a cam upgrade but no one is going to machine me an almost 4ft long camshaft. Besides, I don't believe these engines had very large cam profile. Correct me if I am wrong here.

I still want this engine to run whisper quite as it did factory, but with more whoosh and to give it a competitive edge on today's roads. I feel like it would be a marvel and a really fun challenge as well as quite the spectacle.

Yes I understand a flat head is not the most efficient engine, but I want to see what it has left in it, give it a bit of a modern edge and see how it performs with a few modern twists.

On a side note, I do remember that at one time someone had converted a 5-main variation of this engine to OHV by machining two 4.7 dodge heads together. Does anyone know who they are? It was on an old forum and I could not get any replies, but in their defense the forum was significantly antiquated. If anyone could contact them I would like to ask a lot of questions, who knows maybe I'll do it too?

Also i do know that the next year with the 359 engines they offered an aluminum head. They were prone to cracking and are rare but they do fit, and I wouldn't mind finding one.

All comments are welcome, but please be respectful of others and if correcting someone please do not be rude.

This post assumes entirely that i keep the original engine in place but modernize it!

Attached is a photo of my car taken with a Black & White DSLR.

I will be going with the patina look and just clear coat the original paint for those who may be wondering! 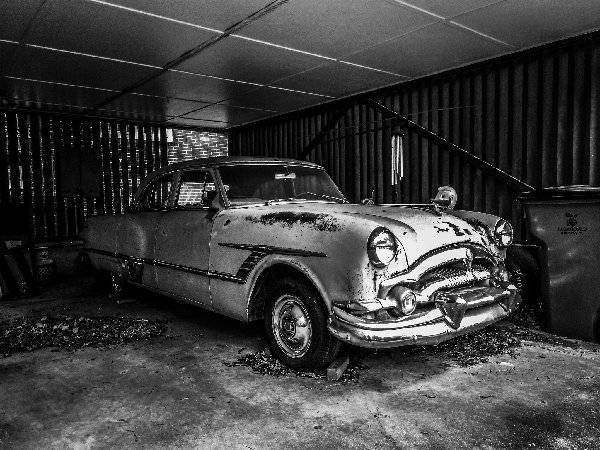