Posted by jack klat on 2016/9/5 14:41:50
Personally, I have always admired these "Soviet Packards". I have seen and have worked on a Gaz-13 "Chaika" and had the opportunity to examine and drive a Zil 111. The differences between the two are like buying an off the rack suit, versus having one tailor made.

The "Chaika" is a well built, but not really a luxurious vehicle. It is more taxi like, in that it is basically built to last several life times. It of course shares Packard influenced styling, and even uses Packard window switches, but cannot be compared to a Packard built automobile. There are items such as the very flimsy grille assembly, which defy logic, but in all, the car is interesting, and to the average American, could pass for a 1950's American car.

The Zil on the other hand was only built for the "creme de la creme" of the Soviet party, no expense spared, and no two exactly alike. The first thing that people fail to realize about Zil cars is that they are truly larger than life. If the designers intent was to intimidate the masses, then they truly succeeded in doing so.

The Zil I had the pleasure of inspecting and driving was a 1960 model, 111. It had acres of high quality chrome plating, and flawless body panels, best of all, it was an original car, never restored or tampered with. It lacked any of the "crudeness" of the the Chaika, and everything fit together perfectly. What amazed me was that the Soviets "borrowed" Packard styling, because in their eyes, Packard was the top of the hill, as far as American cars... not to mention, Stalin loved Packards. Even after his death, the tradition of copying Packard styling carried on.

The Soviets were famous for copying whatever they liked, and looking at the dash panel and steering wheel of a Zil -111, both are very close copies of a 1956 Cadillac Dash. The unit I drove had all of the luxury features, power windows, antenna, seat, steering brakes, divider window, and even A/C. The front seat was very soft black leather, and the rear was of a wool broadcloth type material... very luxurious. This car was also equipped with curtains in the rear windows, as was the fashion for cars of the party elite.

I was allowed to drive the car on the owner's vast estate, and was very impressed with both the power and ride quality. It is strange driving something "so American looking", yet looking down and seeing Cyrillic lettering on everything. Power steering was effortless, as was to be expected in a high end limousine. As the owner of a'56 Cadillac Fleetwood 75, I have to say that the Zil was a better car in all respects.. remember, "cost no object" construction!

Opening the hood of the car, I saw what looked to be a close copy of a Chrysler power brake booster, and similar copies of components from other brands. Like the Chaika, the Zil had radiator shutters to cope with harsh Russian winters. All components were thoughtfully laid out, with ease of access and service in mind.

The rear compartment of the car was very comfortable.. couch like rear seat, perfect stitching and padding. A/C controls for the rear passengers as well as a radio, ash trays and lighters, very similar to my Fleetwood 75.

While some may criticize the "excess" of chrome found on the Zil.. just remember the '58 Buicks and Oldsmobiles. Perhaps the bias is that we choose to judge these cars as "Packards", and in reality, they are something far more special. 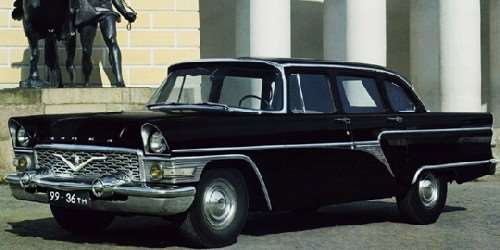