Posted by Rscott77x on 2017/10/3 11:26:14
Install New Ignition Switch 1947 Packard Custom Clipper
(Disclaimer...this may or may not be applicapable to other models). See attached diagram
HH6 and I have to replace our ignition switches. The Packard armoured switch is no longer available -even from a rebuilder. We chose the Pollak 31-180 Four Position Key Start Ignition Switch found on Ebay from Autowire. It is American made and had good specs. Also, It can be modified to use the lock cylinder and the keys you already have if they are Packard keys...makes life much easier! The diagram below will permit starting the engine from either the ignition key or the carb switch.
The terminals on the new ign switch will be labeled BAT, IGN and ACC, and ST (start).
BAT will get the wires from the old switch AM terminal which I think is the upper right as you look at the back of the switch. There are very tiny cast in labels on the plastic space above the terminal and the zinc case. ACC will get the wires now on GA and from IGN will need to be a new wire. That will be the wire now in the armored cable going to the coil.
Just run a wire from the center ST terminal on the ign switch to the carb switch terminal which goes to the solenoid terminal or on the solenoid terminal which holds the wire coming from the carb switch. That way the car will start with turning the key just as modern cars do and also the with the accelerator. 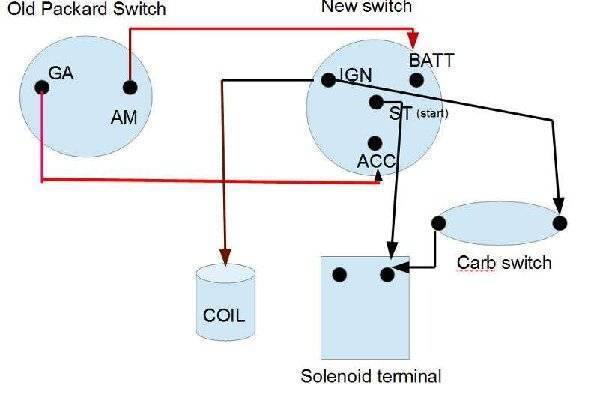