JuanS wrote:
My mistake for not mentioning the year. It is a 1954 patrician. The cigar lighter was missing from the car when I bought it so bought one from another patrician of the same year and put it in. It actually worked (though barely) so it most likely is. So is the issue with the fuse you’re mentioning or just faulty wire splicing?

At the least you should remove the front seat cushion and seatback to check out the wiring between the burned area and the cigar lighter. It is almost impossible to say what caused the problem without looking at the run. You did not say if the replacement lighter was Packards but just be aware that some of the older sockets are slightly different sized and modern and sometimes other mfgs elements from the same time may not just drop in without issues. Modern cigar lighter plugs for electronic items are another item that may or may not work with the old sockets.

There does not seem to be any damage in the portion visible in the photo closer to the center pillar and that is a good thing. I believe through 54 the body feed wire was in a loom that goes above the headliner traveling between the dash and the trunk and that portion will be very hard to check and will require removal of the headliner. Hidden issues in other areas can not be ruled out -- but I do not think any are likely based on where in the overall wire run the damaged area is located. Loom comes out at the left front of the trunk where it gets clamped to the upper trunk opening and goes on to the left tail light area where other wires join.

There is no fuse protecting that wire -- just a circuit breaker on the back of the gauge cluster. There should be two breakers which look like small rectangle boxes with 2 threaded studs sticking out their backs. I believe the aux breaker protecting the body feed wire will be the breaker closest to the center of the car but you can probably see for sure which one it is by finding the wire. I believe the body feed wire will be one of the few cloth covered wires still used in 54 and the wire color if not too faded to see it will be red with a white tracer.

Here is the portion of the wiring diagram showing the damaged area. The burned area is sort of isolated from the rest of the body feed wire which also supplies power to the rear dome light and trunk light. If both of those still work chances are the wire and breaker is still OK. 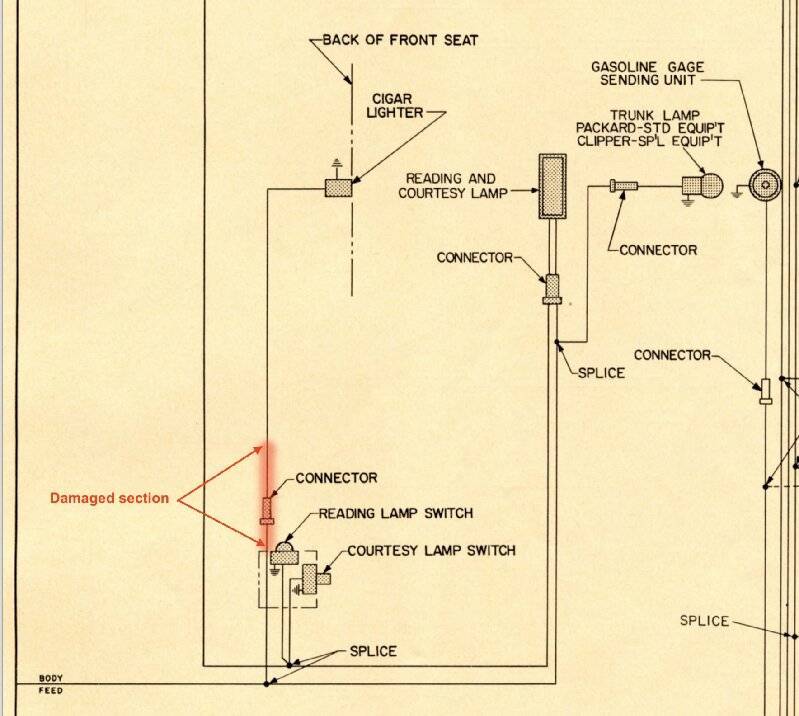