Posted by HH56 on 2022/5/17 9:27:50
The ohm range for the Stewart-Warner gauge used in the Clippers is the obsolete S-W range of 100 ohms at empty and 0 ohms at full. Unlike the K-S gauges used in later years which are the thermal bimetal type and relatively slow in response, the S-W gauge is magnetic and will instantly respond if the sender signal is erratic. A poor contact at the sender will result in jittering at the gauge so make sure when doing the test that moving the arm results in a smooth change on the meter with no drop outs or large changes in ohms that settle back down as the float continues to move. A tiny jitter at the gauge will go almost unnoticed but any large dropouts will be instantly seen. If your gauge is steady now chances are the sender is in good condition.

One thing to be prepared for when mounting the new tank is getting a good ground again. For whatever reason -- probably paint or a rusted surface somewhere -- when several have replaced tanks a good solid ground was not re-established between the tank and body. In spite of numerous attempts at cleaning or remounting, in some instances a separate ground wire has had to be installed between the tank or sender and body sheetmetal for the gauges to work properly when driving. Just keep the tank ground in mind if you later have intermittent issues with the gauge.

This photo of a Clipper Custom sender is slightly misleading because of camera angle but the ruler end is tight against the hump in the sender directly under the first bend. The arm length between the bend at the resistance unit and the bend at the float is just over 5 3/4". When Wat_Tyler has time to pull a 17 gallon sender we can compare the two lengths and find any differences. 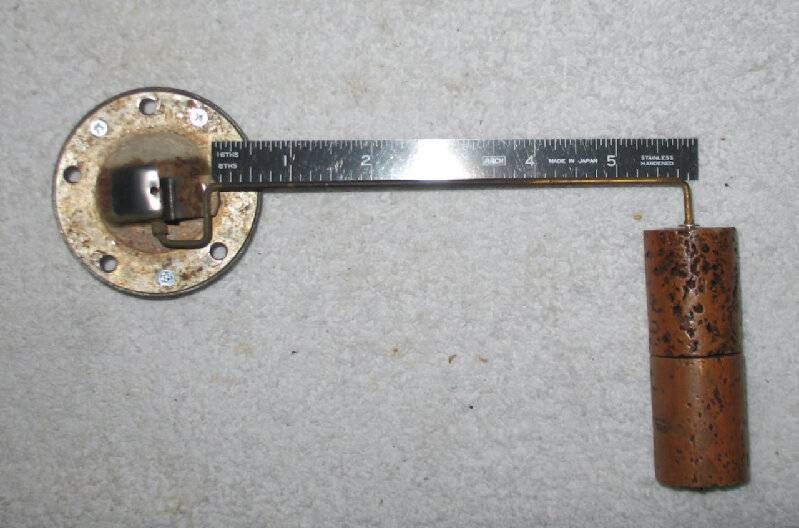