Posted by HH56 On 2021/7/6 13:42:46
The only tie in between the turn signals and brake switch/relay is the brake light signal does go thru the turn signal switch where it is split so one side can be on steady while the other side flashes. This was done in order that the rear bulbs can be shared. Before that change of running the brake light thru the switch was made (for Packard, the 23rd series) signals required a separate bulb in the rear.

First thing would be to check for a burned out bulb or a bad connection in a socket. If those are OK then check the grounds at the park and tail light housings. To operate properly, the old thermal flashers depend on the correct amount of resistance in the circuit being provided by the bulb filaments and having solid connections and ground paths. Symptoms vary but one sign of a burned out bulb or bad ground is the signals will work on one side but not the other or one outside bulb or the dash indicator will flash rapidly or else make one flash and then nothing.

For whatever reason Packards do have a bit of bad reputation for developing poor grounds usually because of rust, corrosion or plain old dirt between body sheet metal and the studs or screws holding the housings or sometimes corrosion between the pot meta and socket crimps at the housings develops. On parking lights in particular some have had to add a dedicated ground between the socket shell and body sheet metal. You might also check the round 7 pin plug coming out of the loom toward the bottom edge of the dash and connecting to a short length of wires coming out of the steering column is also clean and tight.

Here is a circuit extraction showing the brake light path thru the signal switch. Note the switch shown is a 23-54th series. 55-6 switches have the same basic electrical path but obviously a different looking switch. 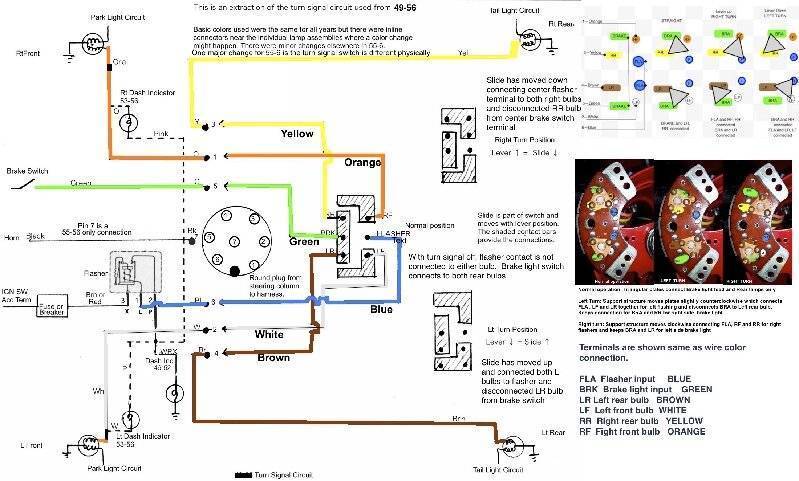