Posted by Leeedy on 2019/2/3 7:42:34
Further information for 1941 Cleveland Welding Company (CWC) including Packard bicycles. Normally I would never post this kind of detail on the internet (in the world of the internet and the old bicycle hobby these things usually get pirated -often accidentally-on-purpose-and then made to appear as if they were sourced elsewhere...then later nobody knows where they came from). But from company records I saved, here are the first page of factory specifications for 1941 CWC series "Model B" bicycles, which would cover 1941 Packard bicycles made by CWC. Also to show I'm not merely expressing opinion or guessing out of the air-and I did not get this information from a DIY web site or gossip forum...

• Regarding the headlight for Roger's Packard bicycle... You will see a notation in the CWC factory specs of "N.E. forklite"...I will translate this. It means "Northeast Tool & Die headlight mounted on the front fork bracket." It would appear that Roger's Packard as pictured has a headlight body made by Delta Electric... with a bezel adapted from something else. The Northeast Tool & Die (normally abbreviated "NTD") headlight was more egg-shaped.

• Regarding the 1941 CWC saddle... Some factory illustrations show what appears to be a Mesinger brand saddle, however, the factory specs list only Troxel. CWC was located in those days in Cleveland, Ohio. Troxel was located in Elyria, Ohio. The two companies had a very good relationship in addition to close proximity. Persons-Majestic replica saddles (as installed on Roger's bicycle) have been plentiful since the 1980s when they were made, but they are still replicas and were never used as original equipment here. I ought to know about these saddles since I am the one who originally suggested to Charlie Persons that he make them! I even stayed at his house. By the way, Persons-Majestic is the company that made such Packard automobile items as stone guards for Packard radiators in the 1920s-1930s. They also made some of the crystal radiator cap ornaments that people TODAY think are all "Lalique" ornaments (some of them are NOT). And it was Persons-Majestic that dreamed up lighting these ornaments with an electric bulb.

Of course I also have the 1941 Cleveland Welding Company dealer catalogue in full color and the consumer information. I have the largest collection of this stuff in the world.

The fallacy of do-it-yourself (DIY) bicycle history-especially when it comes to Packard bicycles is that too many people believe what they see on the internet and in magazines. And on "picker" shows on TV. Apparently most people are somehow convinced this is not serious history, but something that is developed out of communal guessing and gossip and DIY web sites. True expertise cannot be recognized if one believes that the facts and history are only derived by a commune guessing and comparing notes on gossip forums. But it isn't. There IS serious history that exists-even if most people don't know it or refuse to acknowledge it.

Anyway, for what it is worth, here is an exact original page from 1941 CWC bicycle factory specifications-and I can pretty much assure you, you won't find another. Oh, and "Roadmaster" was the house brand name for bicycles made by Cleveland Welding Company and later by CWC/AMF ... 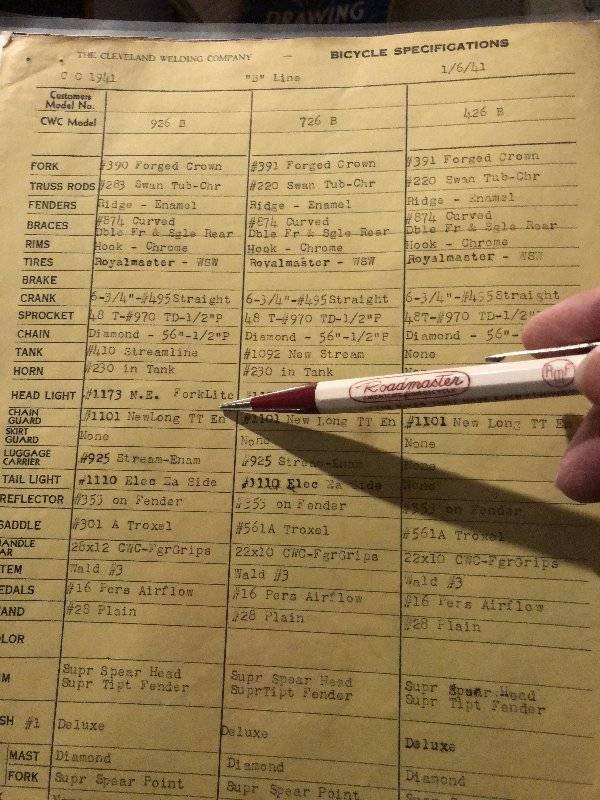