Here is an original ad from our collection showing a Colson-buit Packard bicycle sold by an Ohio chain store and shops. Just imagine... they delivered the bicycle to you on a payment plan of just $1 down! Delivered! Still a decent amount of money in 1936 when it could easily buy you five or six gallons of gas. But if you were lucky enough to have a job in those tough times, not bad at all!

While most of the original advertisements for Colson-built Packards show lesser models, here is a very deluxe model. And it differs substantially from Colson-branded bicycles in several details. This one even came factory-equipped with a speedometer!

And this seller was not a wholesale-distributor... this was a retailer... dealing direct with retail customers. So there was no Packard Motor Car Company dealer involved here.

Packard bicycles have generated more silly stories than even Schwinn-Built bicycles–which is a lot! Again there are silly myths about these bicycles on some DIY sites and guess-at-it forums. One outrageous claim has been made that Packard Motor Car Company somehow owned Colson Corporation– the actual manufacturer of Colson bicycles and Colson-built bicycles. Ridiculous. Another absurd myth bandied around is that Colson Corporation was owned by Schwinn. Rubbish. Yet another claims Colson-built Packard headbadges were somehow Schwinn headbadges. Absurd.

One important point. This store ad makes a mythical claim of its own. It states that Packard bicycles are "exclusive" at this store chain–implying no one else sold Packard bicycles. Not true. Packard bicycles were sold by several retailers and bicycle shops coast to coast. Fact. But this just serves to further complicate what is already a complicated subject for most today.

People just plain don't understand how the American bicycle industry and sales operations (whether they were retail or wholesale) worked in this country way back when these bicycles were made. So? The car people have invented their stories. And the bicycle people have invented their stories. Almost none are accurate, but that doesn't seem to stop people from repeating the wild tales! Or making up more stories.

And if someone who really knows how all this worked says so? Try telling that to the folks spinning the yarns and you'll be shouted down. So the situation is what it is. And dopey stories continue on... and on...and on.

Colson Corporation was a large entity in its own right. They made everything from children's sidewalk wheel goods to a full line of very high quality bicycles to hospital equipment and wheelchairs. The company was also famous for its industrial handling equipment, heavy-duty carts and its world-renowned industrial casters. We have almost all of the bicycle catalogues from beginning to end along with many of the industrial catalogues and and numerous factory photos. We interviewed some of its designers back in the 1950s, 1970s and 1980s. And yes, we have several Colson bicycles as well as Colson-Built Packard bicycles.

Colson Corporation was located in Elyria, Ohio. This making it a natural to find the particular Ohio company (in the ad) selling Colson-built Packard bicycles. Well over half of Colson's bicycle production was not under the Colson brand. And Colson-Built bicycles were not necessarily the same as "Colson" brand bicycles.

However... if you read closely, you won't find any references to "Colson" in the ad. This despite people on the internet today stating "Colson Packard" –as if this was a legitimate model of Colson brand. Not so.

And again... no mention in this nice advertisement of these Packard bicycles being given away with Packard automobiles. This, no matter how many people out there are still perpetuating this myth. Oh– but the store did give you a red/white/blue bicycle racing cap if you showed up with your parents to look at these Packard bicycles! Have you got yours? 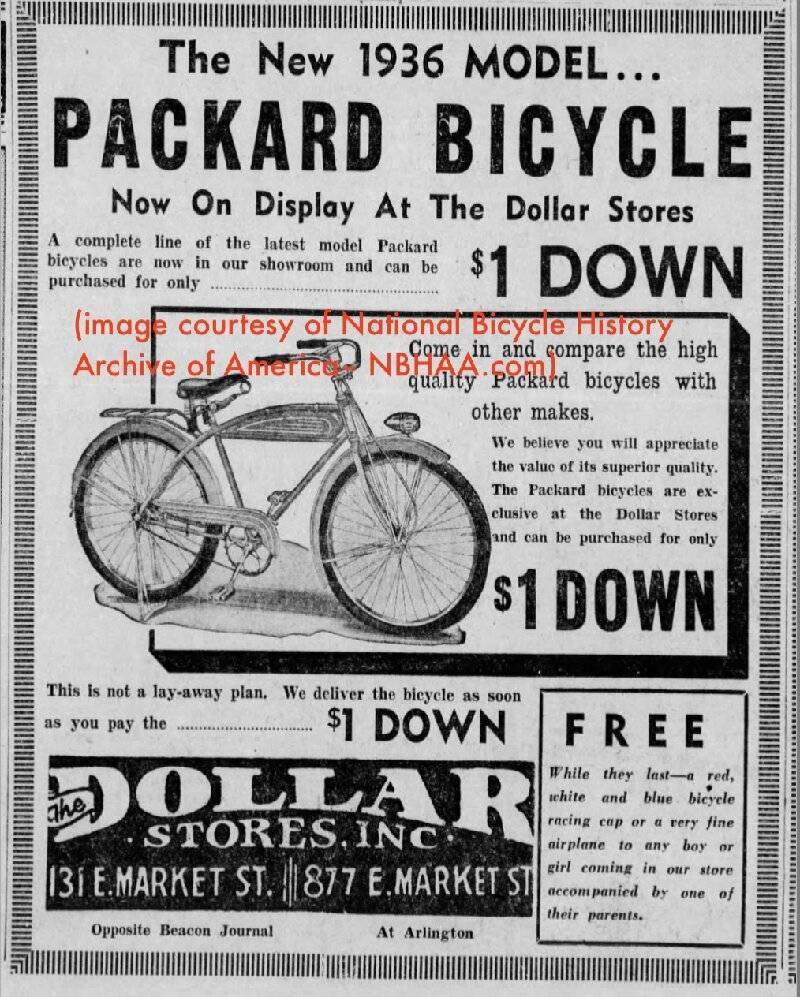