Here you can see I didn't just recently get involved with Packard bicycles. No matter how many "experts" there are on the internet and in the hobby and on TV–being worshipped and adored (and paid huge money) today.

And while folks are bowing and groveling to guys on TV who claim they stumbled "into bicycles" in the very late 1980s... here is what was happening at least 10 years earlier!

I collected my first Schwinn literature in the early 1950s and accumulated thousands of pieces. I got my first Phantom in the 1950s. Started restoring them in the late 1960s. Started writing about them (including in newsletters and magazines like POPULAR MECHANICS) in the 1970s. By the 1970s I already had a fleet of Packard-branded bicycles. So this is how I know this stuff... for well over 50 years.

Here is a letter from Schwinn (yesss, in Chicago...I had correspondence with them for at least 20 years until new regimes took over and the company developed amnesia). Companies only remember what they want to remember.

People have VERY short memories (even shorter than the companies). The internet and TV have erased nearly everything and everyone they choose to ignore for the convenience of creating new "experts" out of thin air. Experts by self-proclamation, the internet, a TV camera and a microphone, a web site... but not time spent accumulating knowledge and information.

With the internet and TV, whatever went on in the previous world could then be easily filtered out–as if it never happened. This is how it works. And this is how seriously important people in bicycle history like Marshal "Major" Taylor were allowed to die penniless and then be buried in un-marked pauper graves after making millions for the very industry that forgot all about him. This part is conveniently forgotten... or purposely swept under the rug. Let's pretend this didn't happen! Today with Major Taylor safely dead, heyyyy ... the internet LOVES him. There are "experts" and Taylor "collectors" all over the place. There are clubs named after him. Monuments in his honor. Evvvvverybody loves Major. Everybody knows about Major. And there are articles and magazines and new books about Major. There are documentaries And films and web sites. If I show an original bicycle component designed by Major Taylor in my collection these days, somebody born after the Apollo moon landing wants to know the "provenance"! But where was the love when Major was starving and couldn't get a biscuit to eat? When he was desperately selling his own books door-to-door and was dying all alone? Where was the love when Major's body laid unclaimed in an Illinois morgue for a month? Where was the love when love COUNTED?

Anyway, when the Holy Grail company decided to repop the Black Phantom in 1995– DECADES after I revived it and made it famous in magazines and newsletters (even on CBS TV in the 1970s) nobody called me or wrote. They couldn't remember seeing mine on display at industry trade shows like BDS-EXPO and INTERBIKE over many years. I had the first Black Phantom in a collector newsletter. Had the first restored one featured in magazines. Had the first one on TV. Wrote the first history of Black Phantoms when even Schwinn couldn't remember the years they made them! But hey. All that was lost in the sands of time. There were new "experts" that dropped out of nowhere. Nobody offered a repop to me or asked advice on making them or about their history. And the new people had no idea who I was. Funny how this stuff works.

Anyway... here is one of Schwinn's Schwinn-centric explanations of the Packard name on bicycles they built. It is mostly correct, but leads one to falsely believe that Schwinn Bicycle Company had some kind of lock on using the Packard brand or was the only bicycle company using this sales method. Schwinn neither invented this method nor had any kind of exclusive on using it–no matter who may say otherwise today.

Schwinn also did NOT invent balloon tires on bicycles. But that's another story. No matter how many mountain bike guys and fanatical collectors, museums and "historians" say otherwise. This is a VERY easily invalidated fallacy–no matter how many years it has persisted.

The last part of the letter from Schwinn has the nice fellow attempting to educate me about something I already well very knew, having worked at the OEM level in the car industry–and having designed a few things myself. Some that actually –YES–got made and out in the market. I already knew for certain where the Schwinn headlight evolved from ...and personally knew car designers who also did bicycles. So this part of the response here is dead wrong. And I knew for certain that in the 1920s to 1960s American bicycles copied cars and American cars copied bicycles. But hey. I didn't argue. I enjoyed getting the letters–and I have stacks of them.

Important note: reference here in the letter to "Schwinn's California Cruiser" model is yet another point to ponder. That model name wasn't Schwinn's at all. Nor was the beach cruiser idea. It actually belonged to my old friend Larry McNeely who owned a bicycle shop named "ReCycled Cycles" back then. He sold both old and new bicycles and began holding swap meets in the 1970s where I was always present.

The shop was located in Newport Beach, then Costa Mesa and Huntington Beach, California. Larry more or less formalized the notion of a balloon tire bicycle made for cruising the paths at the beach. Larry came up with a bicycle he called (you got it) "California Cruiser" and went into limited production with them– special headbadge and all (yes I have a NOS headbadge and original sales flyers–see image below).

The generic term was "beach cruiser"... and most were originally cobbled together out of old balloon tire bicycles. The idea spread all the way to Florida and the Keys where they called them "conch cruisers." Schwinn visited Larry's shop, smelled money and voila! Suddenly they soon afterward had their own "California Cruiser" model–even put it in catalogues. But... all without benefit of permission. But Larry successfully made them stop using the name. So? Schwinn changed the model name to...er..uh... "Spitfire." So if you run across one of the "California Cruiser" models, you actually have a rare bird–especially these days. Poor Larry never received credit or real financial reward for all his hard work. But a lot of people sure cashed in on his ideas. Now you know.

By the way... anyone telling you that Schwinn alone devised this method of selling bicycles under many different headbadges or brand names is naively and sadly mistaken. This method in fact was used by the ENTIRE American bicycle industry for the better part of 100 years. Everybody did it. Not just Schwinn.

And the Schwinn-Built Packard I was restoring in the mid 1970s? It turned out to be a 1939 Packard DX Deluxe– red and ivory. It had mostly original paint, headlight, rear carrier and horntank. I completely restored it to like new (my restorations were real restorations–back to original, not refurbishes with a set of new wheels and brand-X parts from modern times). And yes, not only did I have the factory serial list as of 1977, but I had also begun work on pre-1948 Schwinn serial numbers–something nobody had. This was decades before there was any kind of hobby or internet presence or widespread circulation of serial listings. And my lists differ from the ones distributed in "the hobby" today.

You've already seen my Schwinn-Built 2-tone green 1941 Packard Deluxe Autocycle earlier in this thread. And you've seen my 1940 blue & cream Schwinn-Built Deluxe DX. Now you know about my 1939 and you have evidence I was restoring it 45 years ago! Of course I have many other Packard bicycles not made by ASC.

As for anyone today claiming expertise on Packard bicycles or Schwinn-Built bicycles of any kind... or parading around on TV being paid millions (with fleets of trucks and research staffs) or internet videos claiming to know "history" of these bicycles, ask them what THEY were doing in 1976? Bet they can't tell you this stuff or SHOW you this stuff. And how many prewar Schwinn-Builts, Black Phantoms or Packard bicycles they have owned and restored? Ask them to show you their correspondence files with Schwinn Bicycle Company in or before the 1970s (and believe me, I've got piles more). I did it all alone without TV camera crews, research staffs, sound crews, fleets of trucks, multi-million dollar budgets, NO internet, no web sites, no organized hobby, no repopped parts... well, perhaps you get the picture. 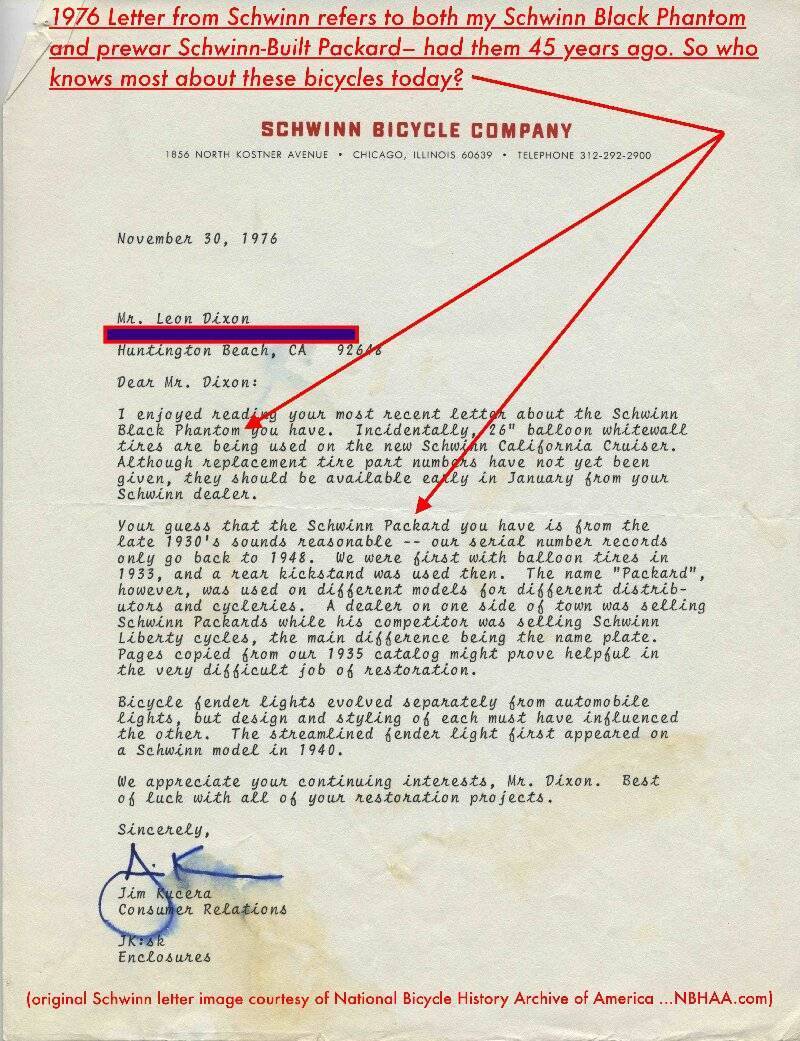 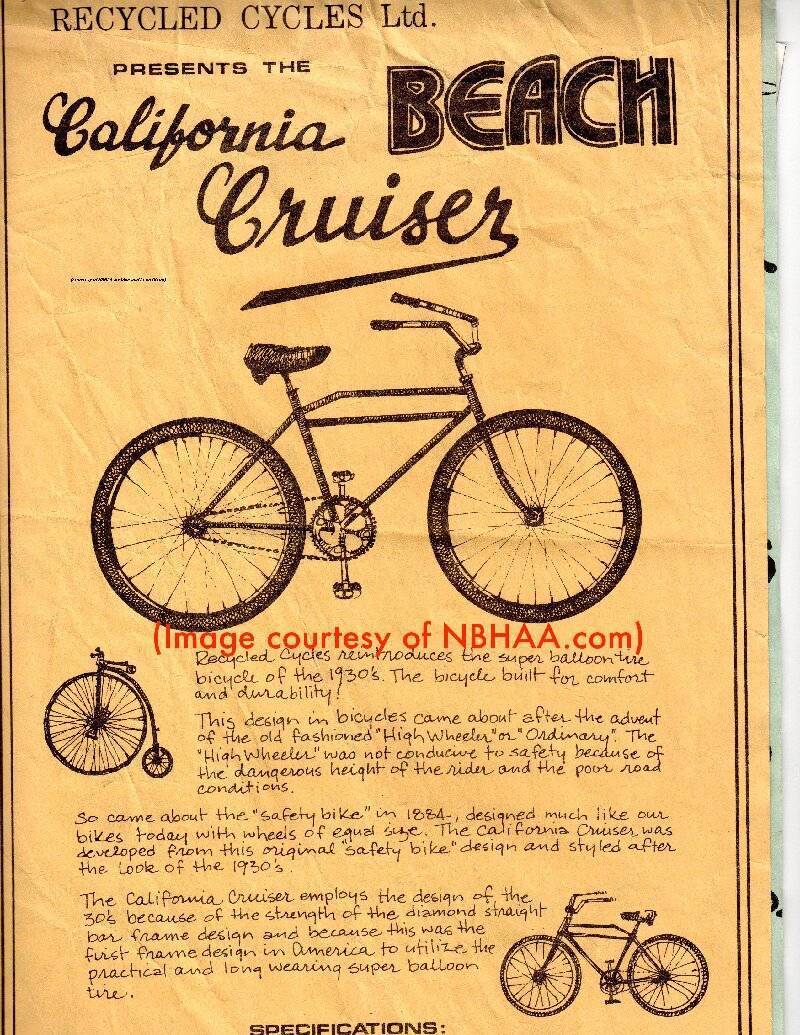