Just to show that the 1925 Packard bicycle made by Arnold, Schwinn & Company had more brethren... submitted for your approval is the Harley-Davidson 1920 bicycle model 220.

Yesss, Harley-Davidson Motorcycle Company had a bicycle division and they indeed manufactured and sold bicycles starting with the 1917 model year. National Bicycle History Archive of America (NBHAA.com) has all of the original Harley-Davidson bicycle catalogues, advertisements and other items from the factory.

The sample catalogue page displayed here is from the 1920 prestige catalogue. It IS genuine. There was also a smaller sized fold-out catalogue that year. We have that one too. Both were printed on coated stock. However individual pages and folded catalogues on yellow parchment paper –and there are a lot around today claiming to be from 1920–are fakes. People displaying and selling these fakes usually won't admit it and will swear they are "originals." Not. But it is not just the H-D literature that is being faked to a huge degree. It is the bicycles themselves. Unfortunately, with H-D bicycles the fakes and repops are "off the chain" as the saying goes. More on this in a bit.

Meanwhile, the original H-D used bicycle hardware largely supplied to them by Davis Sewing Machine Company (ancestor company of today's Huffy bicycle brand in case you are wondering). All of which raises the question of who was copying who... and which of the many arch-bar frames running around in the 1920s was legal and legitimate? And which were not?

Since Iver Johnson Bicycles owned the U.S. Patent on this bicycle frame design, how was ASC able to use it to make Packard bicycles? How was Harley-Davidson able to do it and be legit?

While there are rumors that Iver Johnson licensed the design to a French bicycle maker, there don't seem to be indications of others with licensed usage. Perhaps. But then with Harley-Davidson using Davis, this would mean that both Davis AND H-D would have needed licenses... and things get very complicated, huh? That was then and this is now. So the situation today is a free-for-all frenzy that is out of control and nobody's piloting the airplane.

So... if you are surprised to learn about Harley-Davidson bicycles (the real ones), and wonder how the patented Iver-Johnson arch-bar frame turned up in so many places, there is more to the story.

Also be aware that probably most of the "vintage" (teens-20s) H-D bicycles that turn up today are fakes. Since repop headbadges and fake "H-D" chain sprockets were unleashed on the market years go, there has been an explosion of so-called vintage Harley-Davidson bicycles over the past 15 years or so. In some cases there may be more around today than ever survived natural attrition and the World War II scrap drives!

A very large percentage of Harley bicycles around today have been converted from existing old Davis hardware. And nobody ever confesses that their Harley bicycle is a fake. Every Harley-Davidson bicycle that shows up in an auction or museum these days (and there are a bunch of them) is always claimed to be "original." One even turned up not long ago on the cover of a magazine (the editor and photographer apparently not knowing any better than to feature a color photo of a bicycle with modern Philips-head screws attaching the headbadge– EEeeeek!). So if all these Harley-Davidson bicycles are genuine originals, who is buying all of the repopped fake headbadges and fake "H-D" chain sprockets all over the place? Good question. Don't take my word for it... look on eBay. And with production only running from 1917 to 1922, they didn't make a ginormous number of these bicycles. Finding one–even in the 1970s was rare. But today? 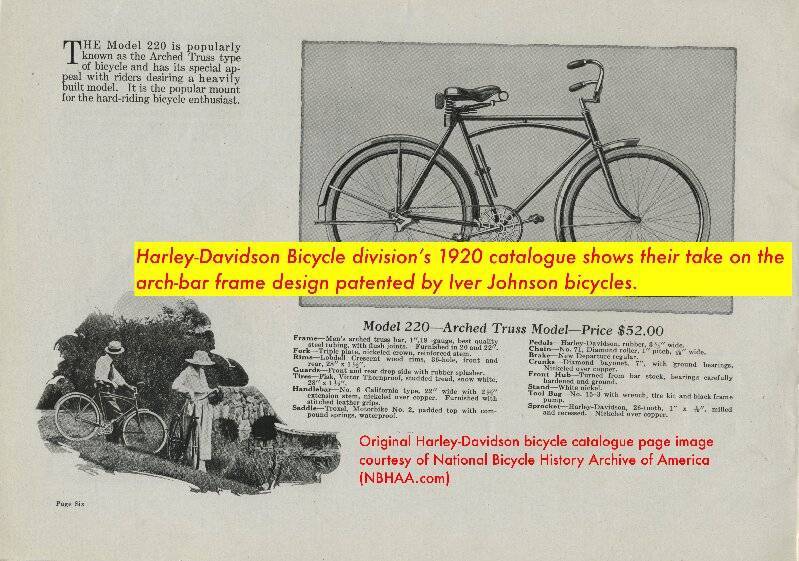