Posted by Leeedy on 2022/1/20 13:33:20
Now... for Colson fans... I've given a little attention to Arnold, Schwinn & Company. But I thought Colson fans might enjoy seeing this photograph from NBHAA.

There are suddenly a lot of folks who like Colson bicycles. And several claiming to be Colson experts. We've been collecting Colson items and artifacts from the factory ever since they were still in business. So we've got a LOT of Colson history and a couple of NOS Colson bicycles. Look back in this thread for photos of some of the Colson-built Packard bicycle headbadges.

The Colson Corporation bicycle factory was located in Elyria, Ohio up until it sold off the bicycle business to Evans Products, Inc. of Plymouth, Michigan. Colson's plant was not far from famous bicycle seat maker, Troxel which (during Colson's life span) was also located in Elyria. of course NBHAA has Colson Corporation catalogues, advertisements, dealerbooks and photos from beginning to end... and beyond. This also includes all Evans-Colson catalogues and papers (yes, they made Packard bicycles too!).

Shown here is a part of the Colson Corporation bicycle factory in the 1930s. Yes, this is an 8 x 10 glossy factory photo from the sets of photos in the NBHAA Archive. What you see are all components of Packard bicycles. And... what no one may know who views this photo, Colson made everything you see in this photo except for the cardboard boxes and building walls. Colson even made the special handling carts here, the racks and even the special caster wheel assemblies (another Colson specialty).

As loyal followers of this thread already know, a huge number of the Packard-branded bicycles were indeed made by Colson... and we have already shown you several... 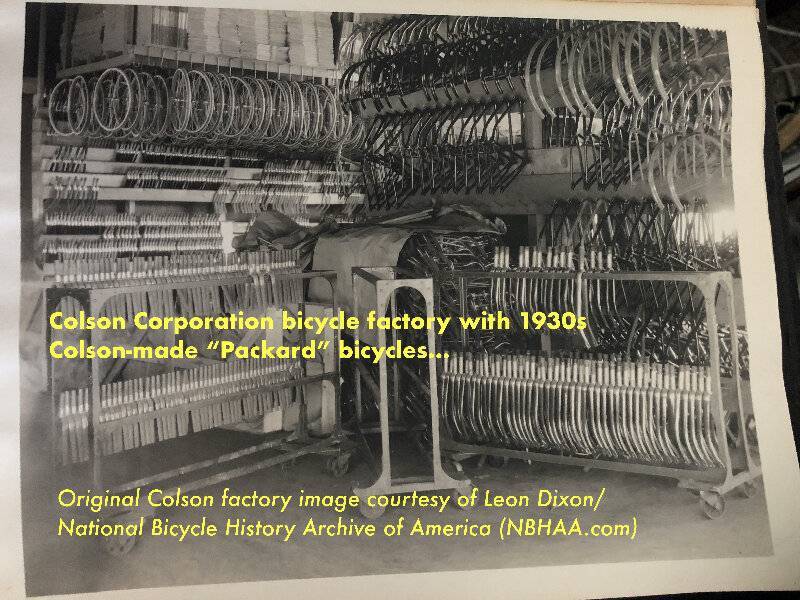