Posted by Leeedy on 2022/4/5 11:38:18
We've discussed Packard bicycles to the hilt... and we have mentioned in this thread that there were numerous other bicycle brands patterned after automobile names. Here is yet another example... and again we also will tell you that the car dealer didn't give a balking customer one of these to "sweeten the deal" on a car. This "sweeten the deal" business on luxury car buying is a modern idea perpetrated by minds of the present era. But typically such things did not happen as may be imagined today.

Now. The legends of fine automobile history say that there were three luxury automobile brands that all began with the letter "P." Of course the first of these was Packard. Then Pierce-Arrow. Then the wonderful Peerless automobiles. Otherwise known as "the three P's."

We've already talked about Pierce (not "Pierce-Arrow" as some mistakenly think they were) bicycles a bit here. We've even talked a bit about Cadillac (and "Cadilac") bicycles. But we'll just bet you've never seen another competitor to Packard bicycles: the Peerless. We'll show you one now.

The original bicycle literature here supplied by National Bicycle History Archive of America (NBHAA.com) is from 1931. Coincidentally that year was the last production for Peerless Motor Vehicle Company automobiles (yesss, some Peerless cars were sold in 1932 but they were merely leftover 1931 production).

Who marketed Peerless bicycles? Several retailers and wholesale-distributors, but in this case it was the almighty Western Auto stores (and bicycle folk will tell you that W-A only sold "Western Flyer" bicycles. Of course... not true.

While there were several different Peerless bicycle models, the deluxe model shown here was intended to compete directly with deluxe Packard-branded bicycles.

This one was was made for Western Auto Supply Company under contract by Shelby Cycle Company of Shelby, Ohio. No... while Shelby is a well-known car name of today, these are two different Shelbys. This bicycle company had no connection with Carroll Shelby and his fabulous cars.

This Peerless you see here was also marketed with slight changes under the brand name "Shelby"... and under the name, "Lindy"- in tribute to famous pilot, Charles Lindbergh. The "Lindy" version of this bicycle featured a miniature "Spirit of St. Louis" airplane mounted on a pedestal on the front fender (yes, yours truly has a 1931 Lindy bicycle and once had it on display at the Oakland Museum in Oakland, California).

Peerless bicycles are rare. The literature on them is even more rare. So remember where you saw it... 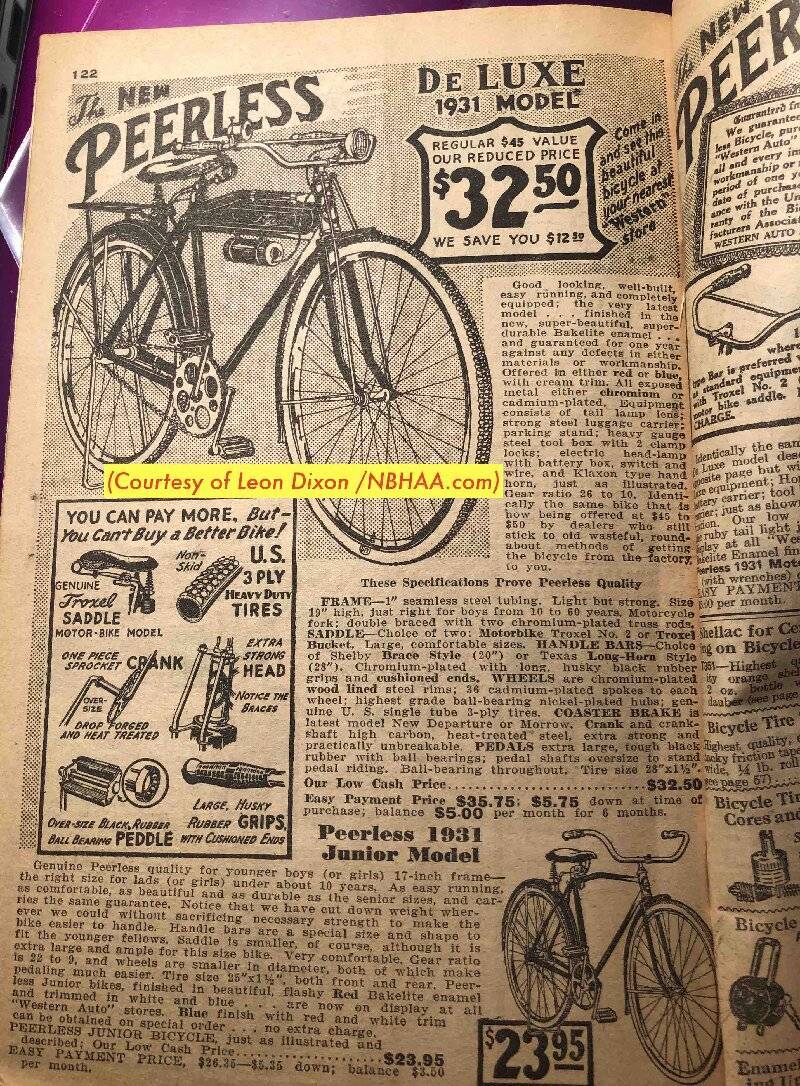